“Indirect Methods” is the third modern classical release from Chris Korda, following “Passion for Numbers” in 2022 and “Polymeter” in 2020. The album features seven algorithmic compositions for strings and piano. The compositions are in complex polymeter, meaning they use at least three relatively prime time signatures simultaneously, and were created within Korda’s unique composing software, the Polymeter MIDI Sequencer. Korda also makes use of method ringing, which is a way of generating continually changing permutations, and Gray code, which minimizes differences between successive states of a set to produce smooth, granular transitions.

The album is a type of phase music, derived from the shifting phase relationships between loops of different lengths. It’s also rules-based generative, which means that instead of writing music directly, Korda designs a system of rules that determine the music automatically. The album’s title references this indirect creative process, which Korda has compared to building a virtual kinetic sculpture that outputs music. Korda routinely collaborates with machines and considers them equals in creative work, because they possess superpowers that people lack, such as the ability to apply elaborate rules flawlessly and nearly instantaneously.

Much of the album is atonal in the sense that it doesn’t conform to the usual scales and cadences, and instead approaches harmony from the perspective of musical set theory. Tonalities are carefully ordered so that modulations that would otherwise be too jarring can be assimilated gradually, step by step. The album also solves what Korda terms the “cat walking on the piano” problem. Atonal composition methods often produce clusters of several semitones in a row, which can be grating, like a cat’s paw striking adjacent piano keys. Korda introduces methods that avoid chromatic clusters, as part of an overall effort to make atonal music more consonant, so that it can appeal to a wider audience.

The cover of “Indirect Methods” features Korda’s algorithmic art, in which geometric forms are enhanced with feedback and effects under the control of phase-shifting oscillators. Korda is inspired by pioneering artist Thomas Wilfred, and continues to explore new applications of phasing to music and art.

The album release coincides with Korda’s eponymous exhibition at Circuit in Lausanne, Switzerland. Clara Delorme will dance to several compositions from this album at the opening, on December 9 starting at 18:00. 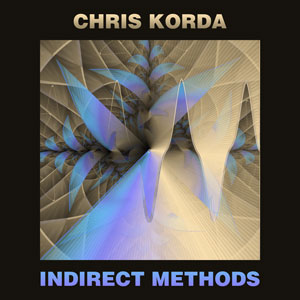 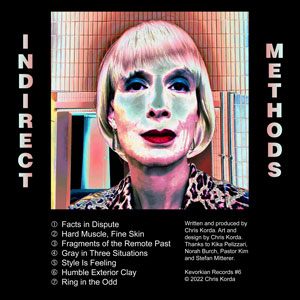